skip to main | skip to sidebar

Surf Art for the Ages 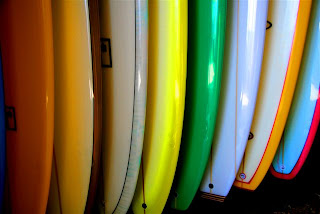 Design comes in many forms, "Surf Art" is no exception. As design concepts change from year to year, the one basic that always seems popular is "escapism" to the beach, which includes surfing of course.
The popularity of surfing since the 50's & 60's has been incredible. Gidget started the movement into mainstream, much to the dismay of local surf heroes such as Miki Dora and others who found their beaches invaded by kooks and ho daddy's from the inland areas.
They just kept coming, so many hardcore surfers found their escape on far-flung beaches in more remote locations throughout the world. Mexico was popular, France, Fiji, Indonesia, Africa and elsewhere. Just the idea of getting away and "finding" new surf locations was the ultimate in the 1970's surf safari mindset. As the Gidget invaders kept coming, the real surfers were on to newer and greener pastures.
What came next was surf inspired designs and culture that changed the fashion world, at least on the coasts. Established surfers went from Bohemian to established businessmen. Some made it in real estate, others founded surf companies, some became very wealthy.
As the community of surfers and the general puplic populated the beaches of California, Hawaii and the east coast, many design thier homes in the style of Surf inspired, casual, coastal retreats.
Homes with classic board on the walls, surf art by a friend of a friend. Some of these homeowners did the art themselves, after a glass of wine or some other creative stimulant.

Karl Meinhardt, Hawaii based surfer, Stand up paddle surfer, artist and Surfrider Foundation member. I create special surf art for fine homes worldwide, check out my website and view images that you can have on your wall or office. All large images on canvas.

Karl
Karl is a surfer, waterman, photographer based in Kailua Beach Hawaii. travels Polynesia and the world to create special surfing images to inspire people and their homes.